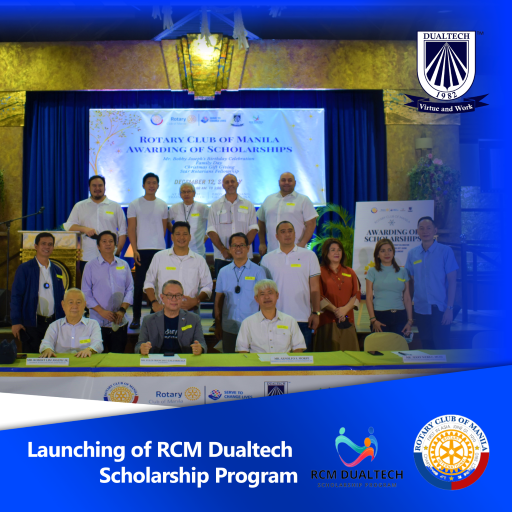 On day filled with generosity and gratitude – The Rotary Club of Manila (RCM) sealed its partnership with Dualtech Training Center Foundation Inc., through the RCM-Dualtech Scholarship Program. Aside from the MOA signing, 10 scholarship grants were awarded to selected students of Dualtech. The event also celebrated the birthday of RCM – Dualtech Scholarship Program chairman Mr. Bobby Joseph, as well as the RCM family day, Star Rotarians fellowship and Christmas gift giving. 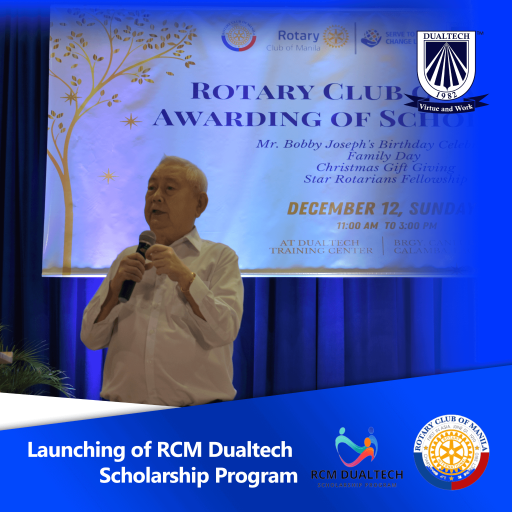 In a message from Rotary Club district Governor Mr. Edwin Tiu, he thanked RCM and Dualtech for “committing to this local act of service” and calls for all Rotarians to support the cause to further help the society. Mr. Felix “Chito” Zaldarriaga said, “the values inculcated into the students and employees of Dualtech is what makes the institution a gem in Carmelray Industrial Park.” He also thanked Mr. Bobby Joseph for his service and reminded everyone to “accept the gift of Jesus that will lead us to eternal life”.

In return, Dualtech president Mr. Arnolfo Morfe thanked RCM for investing its trust in awarding scholarships to Dualtech students and that RCM’s gesture gives further reason for Dualtech to persevere in its mission to society. 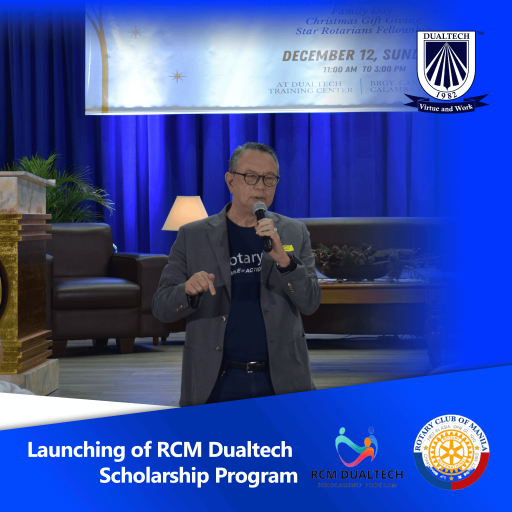 Mr. EJ Esguerra (son of Herminio Esguerra) in his message said that their company is grateful to Dualtech for the opportunity of donating to scholars. From an initial pledge of 1 scholarship , he added 4 more scholarship grants, with a receipt of donation from Rotary Club District 10. Bobby Joseph then had  to say “this has been the best thing that ever happened to RCM” and that they are targeting to sponsor 30 scholars until February 2022. With this initiative RCM is also pushing for a grant from Rotary International.

Long time Dualtech partner, Nagi Zeitouni, encourages companies to employ Dualtech graduates and pointed out that through the years, he has been hiring hundreds of Dualtech graduates because of their eagerness to learn and trustworthiness and lauded the Dualtech staff for their dedication.

As a final message live via Zoom, Mr. Herminio Esguerra, chairman of the RCM Foundation, extended his support to the partnership and gave the assurance in continuing to advocate for Dualtech’s program. In a part of his message Mr. Esguerra said that “Workers aren’t hired by skills alone, but through their attitude. Dualtech not only imparts skills but also values” and that there is potential for graduates to be employed in future projects of RCM members. Surprisingly before ending his message,  Mr. Esguerra stated that he will immediately pledge additional 5 scholarship grants.

To end the event, Dualtech president Mr. Arnolfo Morfe said in his closing message., “We are touched by your generosity and (we) are more energized to continue Dualtech’s program… and maybe someday some Dualtech graduates can be members of the Rotary Club (in order to give back).”

A total of 10 scholarship grants were donated during the event. All ten scholars were present, from Camarines Sur: Richard Aranel, Junie Berwaga, John Anthony Catorce, Florence Cello and Ricky Vargas; from Quezon Province, Ralph Vincent Jaquica and Mark Joshua Patiag; from Batangas, JonjieMariño and from Pampanga, Rodrigo Laus Jr. Aside from certificates of scholarship, the students were each given a wrist watch, grocery pack and 2000 pesos cash from RCM members, Mr. Bobby Joseph, and Mr. Nagi Zeitouni. The students were given the opportunity to thank their sponsors and they promised to work hard until they graduate, to help others in return for the blessings they received.