The Stories We Treasure 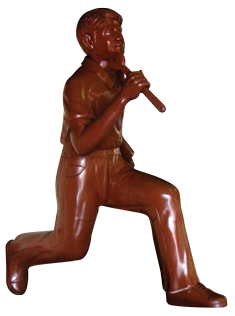 Of the many trees that got uprooted, there was a big narra tree that fell right in front of the building. During this typhoon, there were companies whose regular workers did not report for work, except for Dualtech trainees.

Were it not for the presence of these students, much damage to plant equipment would have been sustained.

The then school president, Ramon B. Santos, was informed of this and he was inspired to commission work on a statue that could represent the Dualtech student. He asked that an image of a “running boy” be sculpted. The big narra tree offered enough material for a woodcarving.

The finished sculpture portrays the eagerness of a Dualtech boy to study, to work and hence to serve. He does not just walk --- he runs! 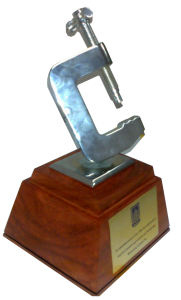 C-clamp goes through a ten-step process. It starts off with a rough, solid block of metal. Then it is cut, filed, drilled, polished and assembled.Like the C-clamp, Dualtech scholar goes through a similar process. Dualtech forms his character, cuts the old self, fills his mind with proper work attitudes and values, and drilled and polished with academic requirements.

In making the C-clamp, the scholar himself will learn the value of hard work (more than 6 hours filling to size); perseverance (manually cutting the solid block); attention to details (measurement and angles); efficiency (the solid block of metal was used to its fullest), and work effectively.

C-clamp is no longer seen as a simple device to hold things down. Rather, its a symbol of what Dualtech scholars have endured as a Christian Technician.